Flying Through the Storm:
An Interview with Peter Carter, CLO of Delta Air Lines

Flying Through the Storm

In 2018, Joseph Reid, partner at Perkins Coie, had his first thriller published, and from there his writing career took off. Here are five things you may not know about Joseph and his bestselling Seth Walker series: 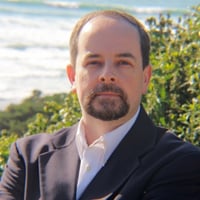 Insider Tip: Joseph will throw in the names of his colleagues or clients throughout his stories—you never know what name will show up attached to a body or in danger!